After our uphill exploits of the last two weeks we needed to decide if would again go high or if we should give ourselves a wee bit of a break and have a reasonably long walk but keep to lower levels. In the end we decided on the latter, although there were a couple of pulls uphill early on. There is very little of Morven Lodge left, in fact there is nothing of the lodge itself only some outbuildings and bits and pieces of the gateway, but it's a nice walk in and it's not difficult to see why it was built in this particular glen.

The walk starts at a small car park just across a green bridge beside a lone pine tree on the A939 just a mile or so north of the Gairn. 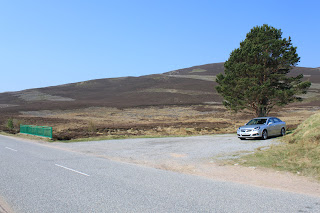 Carpark
A couple of hundred yards further up the road on the right there is a farm track that leads up to the now derelict Glenfenzie Farm house. As ever when you look at these cottages it's difficult to picture how the people survived in such crude buildings, but survive they did and even if they had nothing else they still had a fantastic view with Mount Keen peeking above the outline of the other hills in the foreground. Our guide book assured us that carved into the walls of the cottage were two reminders of the people who lived here. In the top left hand side of the front wall is the date 1822, and on the right hand side beside the window there is a faint inscription DM 1879. Who these people were is lost in the annals of history but the inscriptions remind us that real people lived and died here. 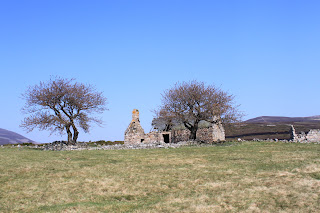 Glenfenzie Farm House
From the farm house we headed down along a good path to where we had to cross a tributary of the Glenfenzie burn, (which itself is a tributary to the Gairn). Now after our exploits crossing the Water of Tanner last week, crossing these stepping stones was a walk in the park, so to speak, but it did make us smile. 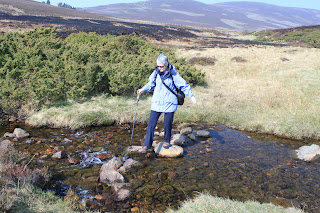 Careful now!!
This leads away from the stream and up the only real climb of the day around the flank of Tom Liath on our left and Lary Hill on our right. Also on our right, over our right shoulder in fact, is the wonderfully named Mammie Hill. Apparently the translation is "little round hill" rather than anything maternal, but it sounds nice anyway. As we crossed the ridge between the hills we got our first view of the lodge buildings nestled at the base of the grand edifice of Morven and for the first time we began to realise why they had chosen this location. 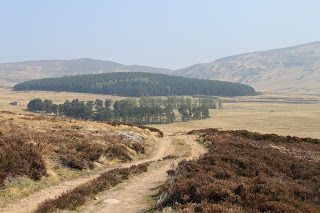 Nice spot for a holiday home!
The "they" in this instance was Alexander Keiller, of the Dundee jam empire, and had been built in the late 1800's as a sporting lodge. It turns out however that it was decided that the location was a touch too remote so the lodge was dismantled stone by stone and rebuilt on the outskirts of Ballater and we now know it as the Craigendarroch Hotel and Country Club. I suppose it's easy to say, but I think I'd have preferred the original remote location to the convenience of of Ballater! We decided that the old laundry building would be a nice spot for our first coffee break of the day. 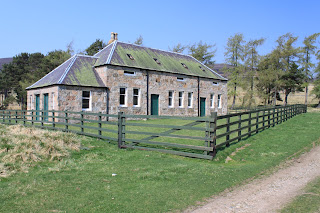 It's difficult to imagine what the building must have looked like. With no images that I could find it was left to our imagination, but going by the size of the laundry building it must have been pretty impressive. Across the track from the laundry is a large circular area, bounded by an overgrown dry stane dyke, and it's this that gave us an idea of the scale, although again there was no clue as to how much of this area had been buildings and how much had been garden. We spent some time exploring the old stable block and took some photos of what was apparently the keeper's house and the shepherd's house. 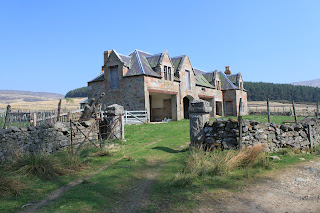 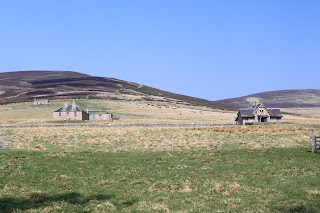 Keeper & Shepherd's houses
We spent the next half hour or so wandering around inside the circular enclosure playing Time Team and trying to make sense of the humps and bumps but in the end we couldn't even decide which way the house would have been, although for it not to have looked south down towards the Gairn river would have been madness! We left through the remains of the entrance gates some pieces of which have survived but they are in a sorry state. 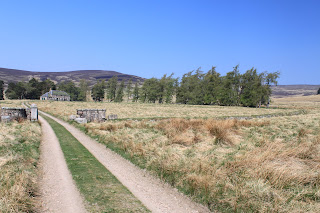 Grand entrance - enclosure off to the right

The route we had been following now took the main track south where it would eventually cut up onto Lary Hill then down onto the original path in just above the Glenfenzie farm house, but today we decided to go off on our own and explore the countryside down by the river Gairn. We followed the main track down the length of the valley, walking parallel with Morven on our left. Eventually we arrived at the spot where the track curved behind Lary Hill and the point where guests travelling to the Lodge would have caught their first sight of it. If they weren't impressed then they were already dead. 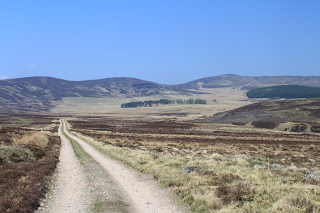 First view on arrival as a guest

We followed the track downhill, steadily losing height eventually meeting up with the Lary Burn where it joined the Gairn River. The walking was easy now and as we continued to lose height the trees and wild flowers became more abundant. The weather had also continued to improve and with the shelter of the hills we were now walking in tee shirts and were still too warm. Great!
We passed a couple of farms and what looked like estate buildings but there was no sign of life in any of them. I was looking for a particular track that traced the Gairn upstream because the O&S map showed a ruined chapel and, as ever, I was keen to look at a bundle of old rocks and to see if we could put the picture of what it might have looked like together. The nice surprise about this particular part of the walk was the fantastic birch wood we walked through and the carpets of wild flowers. All very picturesque and made the more lovely because we weren't expecting it. 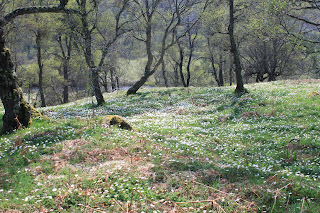 Birch trees & flowers - gorgeous!
Needless to say the ruined chapel never turned up - at least not where we expected it! It should have been obvious, (on the assumption there was anything left to see), since it should have been up hill of the footbridge across the Gairn but after a good look around we moved on. About ten minutes later we came upon our first waymarked post, so we had obviously stumbled across a walk. The post was marked "History with Boots On" which is a great title. If you want to visit their website on walks around Deeside you'll find it here . Just up from the first post we came across an information sign telling us that we were looking at the old manse. Great, we now knew where the manse was but still no idea where the chapel was! 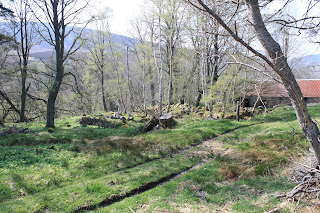 Ruined manse but no chapel!
From here we walked up out of the woods and back onto the main track that would takes us around the base of Mammie hill and back towards the car. We stopped in a grassy clearing and finished off our coffee and sandwiches and lay in the sun for half an hour or so. The only frustration of the day came after we had set off again and we came across another information post beside a ruined building. These ruins, according to the sign, were what were left of a chapel! Well either we're talking about a different chapel, or somebody's got it wrong. 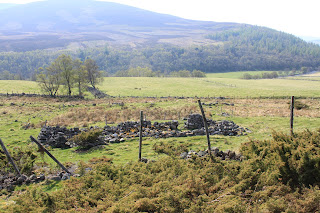 Chapel ruins - but is it?

We had a last, long pull up a steady climb as we made our way around Mammie hill, eventually meeting the road about a quarter of a mile from the car. It had been a fantastic spring day and the sun had shone the whole way round. In some ways it was a pity it had finished. We had left the car at nine thirty and arrived back just after three, so very pleasant and manageable day. Only thing left to do to is thank Robert Smith for the background information on the area taken from his book "25 Walks on Deeside."